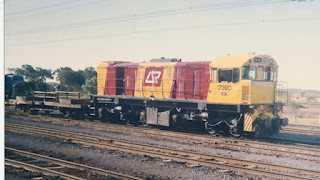 Recently repainted 1739D sits in the Gladstone Yard
in the early- mid 90's during a shift change.
There were six shunts in the Gladstone area during the early 90’s. The No.1 Shunt was known as the Yard Shunt. The 1720 class were predominantly the class of locomotive used for the yard shunt. As DOO conversation gradually rolled out the Yard Shunt was consistently a DOO locomotive while the Jetty Shunt (No.2 Shunt) remained an original 1720 for some time until majority had been converted.
The Gladstone shunts were generally drawn from the Rockhampton locomotive pool and sent down every so often for replacement on local work trains. The general pool was usually locomotives numbered between 1733 through to 1740 and also 1771. 1736D was a regular operator of the Yard Shunt for a number of years, after which 1738D or 1739D were the flavour of the month. Towards the end of the 90’s the 1502 class were used as the Yard Shunt for around six months. It was believed that this occurred due to heavier loading that required shunting in the yard (generally the Mount Miller and chemical loadings) and the fact that the 1502’s were becoming surplus due to the introduction of the 2800 class. The 1502 class did not last long before the 1720’s returned. The early 2000’s saw the 1550, 2100 and 2400 classes take over but once again today the 1720 has returned possibly for their last stint. 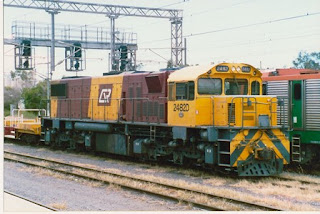 
The Yard Shunt had one LSR/T (runner or shunter’s float as others may know them by) attached to the No.2 end of the locomotive. The locomotive would always have its No.1 end facing ‘Up’ (towards Brisbane) as was the norm for most shunts in Queensland. Towards the late 90’s buffers were removed from the locomotives and rollingstock. This was a result of the draw hook wagons being removed from service. It also assisted in the prevention of workplace injuries during shunting. Despite this one end of the runner’s buffers were not removed as they were still occasionally required to shunt ‘antique’ draw hook rollingstock.
In the early 90's the Shunt consisted of a driver, a DA (driver’s Assistant) and three shunters. The shunt operated from 00:01 hours on Monday through to around 13:00 hours on Saturday. The crews were rostered on eight hour shifts which started at 00:01, 08:00 and 16:00 hours. After its final shunt on the Saturday it would detach its runner in the water road and then ran light engine to the South Gladstone Diesel Shed. There it would be attached to all the remaining shunts and the occasional left over Moura locomotives and sent light engine to Callemondah for servicing. They would then return Sunday night ready to start by midnight. It was a great sight to see the shunts head to Callemondah for servicing as there were no less than 6 locomotives in the light engine movement.
The Yard Shunt covered the Gladstone Yard, QRX sidings, the goods shed sidings at Auckland Point and the wagon workshops (when they were operating). Occasionally it would share tasks with the Jetty Shunt and South Gladstone Shunt if movements were running behind schedule. When the Jetty Shunt permanently ceased operations around the mid 90’s the Yard shunt took on all roles of the Jetty Shunt which consisted of the grain and fuel sidings etc. The Yard Shunt would always attach and detach loading from visiting freight trains and also shunted the mail from the ‘Mail Trains’ such as the Capricornian. Now-a-days the ‘Mails’ do not carry mail, the Capricornian does not exist and visiting freight trains do their own shunting in the yard.